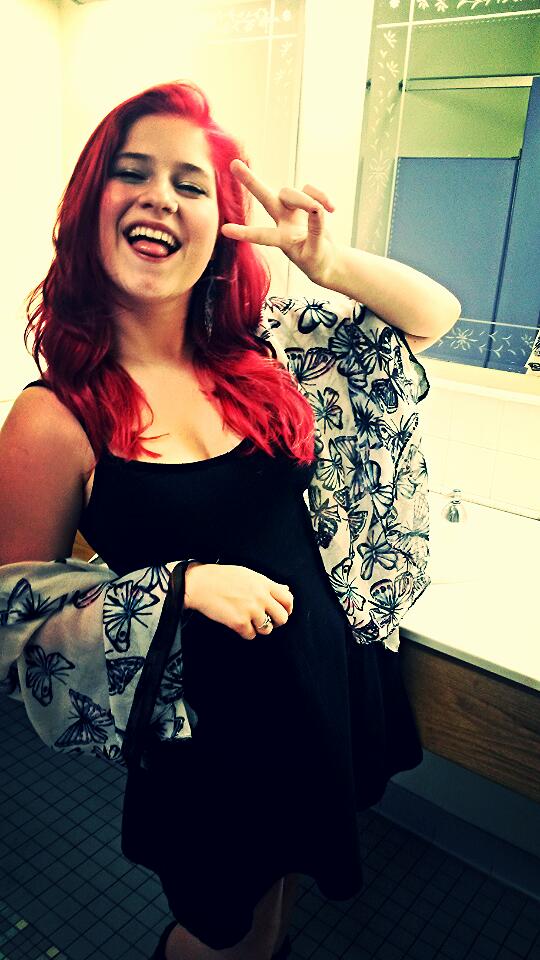 Junior Katharine Keenan poses in a high school bathroom as part of a series. PHOTOGRAPH BY ELISA ALEXANDER '17

Junior Elisa Alexander often finds herself in the bittersweet situation of wanting moments of her life. She’ll be walking with someone, or having a conversation, and she’ll find that she wants nothing more than to freeze the moment and she’ll stop what she’s doing in order to enjoy the moment. “I wanna just freeze. I’m content. I’m really happy and I want that to last forever but obviously it can’t and then I end up stopping talking and just relishing the moment and the person thinks I’m a weirdo and then they walk away and the moment’s over and it’s horrible.”

To Alexander, photography is a chance to capture those emotions and go back to them whenever she wants. She can relish those beautiful moments, and even share them with other people, and it’s socially acceptable. Especially as a Junior, she has very little free time, so photography is making one little moment last forever. With time in such short store Alexander can have a few things that never end.

One of the magical things about photography is the way that it can be shared. It can convey strong emotion to people with only a glance. It’s so immersive, and although you may only see a photograph for a moment it can still be meaningful and stay with you long after you see it.

This particular series had a lot of meaning to Alexander. She photographed a friend of hers and created a compelling story and an interestingly ambiguous message.

Alexander has been observing a phenomenon among her friends: as girls get older they begin to wear makeup and become more concerned about their appearance. They wear makeup and spend time on their hair and their clothes. Alexander felt conflicted about this because she always thought that her friends were beautiful without the work put into their looks, but she says that she also understood why they did it.

“Some people think that making themselves look pretty is like an art but there’s also a line where people feel like they’re putting on a mask and having to hide themselves.” Alexander was concerned that her friends couldn’t be confident in themselves without makeup and other superficial things. She thinks that this mask covers over a truth and a youthful happiness which is very beautiful.

The pictures begin with the model, Junior Katharine Keenan, posing for the camera. She is clearly aware of an observer and putting up a face for them. In the proceeding pictures she lets that affect drop away. She puts her hair up in a pony tail and begins washing off her makeup, or mask.

She takes a moment, staring into the mirror, we see her reflection somewhat distorted. Alexander compared this picture to a scene in Richard Ⅲ where he is all alone for the first time in the play. Richard puts on a facade in front of everyone else but in this moment he opens up and kind of loses it. Elisa said that she wanted to mirror (no pun intended) that moment in this photograph.

In the end Keenan comes back and smiles at the camera in the last photograph. This smile had a lot of meaning to Alexander. Keenan is no longer wearing makeup, so it symbolizes confidence without that mask of makeup. On the other hand, she’s still clearly very aware of the camera and so one can never know if that smile is really genuine.

“You never really see her. You never really do see anyone. Your true self is always something that can be hidden whether or not you’re putting up a mask. Nobody really knows that side of you and even in the end where it’s all happy, yay, she wiped off all of the mask and stuff she’s still kind of smiling for the camera and you still don’t really know, what if she’s not really happy in the end?”

Alexander worries about self image among teenagers of our generation. She thinks that we should be able to be confident in ourselves when we’re exposed for who we really are. She wants her photographs, which mean so much to her, to leave people thinking about things that are really important. She wants people to see her pictures and think about the different ways that they could be interpreted and connect to them personally.